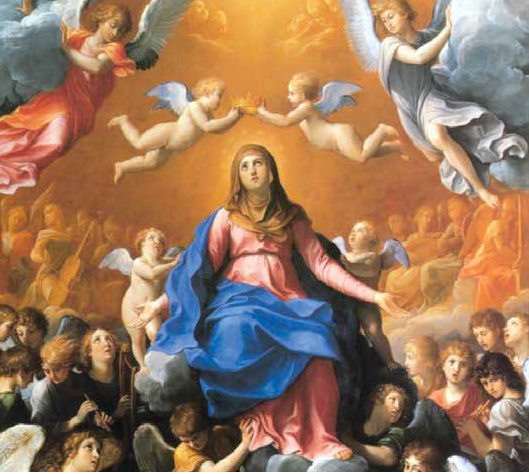 The Assumption of Mary into Heaven, also known as the Falling Asleep of the Blessed Virgin Mary (Dormition), is one of the most important Feasts in her honour. It is, according to the beliefs of the Catholic Church, Eastern Orthodoxy, Oriental Orthodoxy, and parts of Anglicanism, the bodily taking up of the Virgin Mary into Heaven at the end of her earthly life. This dogma of faith teaches that the Immaculate Mother of God, the ever Virgin Mary, having completed the course of her earthly life, was resurrected, glorified, and taken bodily into heaven.

Faith in the assumption of the Bl. Virgin Mary existed from the apostolic times. In May 1946, with the Encyclical Deiparae Virginis Mariae, Pope Pius XII called for a broad consultation, inquiring among the Bishops all over the world and, through them, among the clergy and the People of God, as to the possibility and opportuneness of defining the bodily assumption of Mary as a dogma of faith. The result was surprisingly very positive: only six answers out of 1,181 showed any reservation about the revealed character of this truth.

Finally, after much prayer and preparation, Pope Pius XII dogmatically defined this doctrine  on 1 November 1950 in the apostolic constitution Munificentissimus Deus by exercising his papal infallibility:  “By the authority of our Lord Jesus Christ, of the Blessed Apostles Peter and Paul, and by our own authority, we pronounce, declare, and define it to be a divinely revealed dogma: that the Immaculate Mother of God, the ever Virgin Mary, having completed the course of her earthly life, was assumed body and soul into heavenly glory”. This dogma is a matter of faith that has been divinely revealed by God and that has been infallibly proposed by the Magisterium of the Church as such. Since it is an “ex cathedra” statement (taught officially by the Pope), it calls for the definitive assent of the faithful. Pope St. John Paul II says: “The definition of the dogma, in conformity with the universal faith of the People of God, definitively excludes every doubt and calls for the express assent of all Christians”.

The Catholic Church itself interprets Chapter 12 of the Book of Revelation as referring to Mary’s assumption. However whether she had a physical death or not, is not dogmatically defined. Pope Pius XII deliberately left open the question of whether Mary died before her Assumption. There are many Catholics, who believe that she did not die at all, but was assumed directly into Heaven. However, it seems fitting that her body, which was by nature mortal, should be, in conformity with that of her Divine Son, subject to the general law of death. Pope Pius XII writes: “Mary, by a completely singular privilege, conquered sin in her Immaculate Conception, and thus was not liable to that law of remaining in the corruption of the grave, nor did she have to wait for the end of time for the redemption of her body” (AAS 42.754).

The Key to the Doctrine:

It seems that the precise ground for the definition lies in the following passage of the Apostolic Constitution: “Since the second century, the Virgin Mary has been presented by the Holy Fathers as the New Eve, who was most closely associated with Him in that struggle against the infernal enemy which was to result in that most complete victory over sin and death. Wherefore, just as the glorious resurrection of Christ was an essential part and final sign of this victory, so also that struggle which was common to the Blessed Virgin and her Son had to be closed by the ‘glorification’ of her virginal body” (AAS 42. 768).

Pope St. John Paul II says that although the New Testament does not explicitly affirm Mary’s Assumption, it offers a basis for it because it strongly emphasized the Blessed Virgin’s perfect union with Jesus’ destiny. This union, which is manifested, from the time of the Saviour’s miraculous conception, in Mary’s participation in her Son’s mission and especially in her association with his redemptive sacrifice, cannot fail to require a continuation after death. Perfectly united with the life and saving work of Jesus, Mary shares his heavenly destiny in body and soul. Her assumption is said to have been a divine gift to her as the ‘Mother of God’.

In Munifissentimus Deus Pope Pius XII refers to the “struggle against the infernal foe” (Gen. 3: 15) and to the ‘woman clothed with the sun’ whom John the Apostle contemplated on the Island of Patmos (Rev. 12:1ff). Similarly the Fathers of the Church have given special attention to these words of the New Testament: “Hail, full of grace, the Lord is with you, blessed are you among women” (Luke 1:28), since they saw, in the mystery of the Assumption, the fulfilment of that most perfect grace granted to the Blessed Virgin. The Pope also quotes 1 Cor. 15: 54 as scriptural basis for the dogmatic definition in terms of Mary’s victory over sin and death: “Then shall come to pass the saying that is written, death is swallowed up in victory”, which means complete victory over sin and death.

We read in the Old Testament that Enoch was taken into heaven without seeing death (Gen. 5: 23-24; Hebr. 11:5) and Elijah was whisked into heaven by the chariots of fire at the end of his life (2 Kings 2:11). If God could assume these righteous men, it is certainly possible that Jesus could assume his own mother as well.

History of the Belief:

The first trace of the belief in the Assumption of the Virgin Mary can be found in the apocryphal accounts entitled Transitus Mariae (The Crossing Over of Mary”), whose origin dates to the second and third centuries. The earliest versions of this Apocrypha are preserved in several Syriac manuscripts of the 5th and 6th centuries. The first Church author to speak of the bodily assumption of Mary, in association with the Apocrypha is St. Gregory of Tours.”

Orthodox tradition is clear and unwavering in regard to the central point of the Dormition: the Holy Virgin underwent, as did her Son, a physical death, but her body, like His, was afterwards raised from the dead and she was taken up into heaven, in her body and soul. The Resurrection of the Body has, in her case, been anticipated and is already an accomplished fact. Eastern Christians also believe that Mary was resurrected on the third day after her death.

Today, the belief in the corporeal assumption of Mary is universal in the East and in the West. Most of Fathers and Theologians throughout the centuries have affirmed that Mary did experience death—not as a penalty for sin but in conformity to her son, who willingly experienced death on our behalf. In support of this latter view, Pope St. John Paul II says: “The Mother is not superior to the Son who underwent death, giving it a new meaning and changing it into a means of salvation”. St. John Damascene wrote: “If Mary was full of grace and did not suffer from original sin, it is fitting that she, like her son, would not experience bodily corruption”.

The earliest traditions say that Mary’s life ended in Jerusalem and St. Thomas, one of the apostles, was not present at her death, but his late arrival precipitated a reopening of Mary’s tomb, which was found to be empty except for her grave clothes. St. John Damascene records: “St. Juvenal, Bishop of Jerusalem, made known at the Council of Chalcedon (451), that Mary died in the presence of all the Apostles, but that her tomb, when opened upon the request of St. Thomas, was found empty; wherefrom the Apostles concluded that the body was taken up to heaven.”

The feast of the Assumption

The feast of the Assumption of Mary was celebrated across the Christian world from the 5th century and it has been established in the East by Emperor Maurice around AD 600. The Assumption of Mary was celebrated in the West under Pope Sergius I in the 8th century and Pope Leo IV confirmed the feast as official. The faithful celebrated the feast of Assumption as part of the cult of Mary that flourished from the Middle Ages. The Latin Catholic Feast of the Assumption is celebrated on 15 August, and the Eastern Orthodox and eastern Catholics celebrate the Dormition of the Theotokos (the falling asleep of the Mother of God) on the same date, preceded by a fast lasting for 14 days. In many countries, the feast is also marked as a Holy Day of Obligation in the Catholic Church and as a festival in the Anglican Communion.

The Consequence of the Doctrine in Everyday Life

By contemplating Mary in heavenly glory, we understand that the earth is not the definitive homeland for us either, and that if we live with our gaze fixed on Mary we too will one day share her glory. We must rejoice and be happy about the fact that Christ himself has given us His mother as our mother and that Mary who has accepted us as her children, shares the glory of her divine Son. We all hope to share one day the same glory. This conviction will help us not to get discouraged, but to surrender ourselves to Mary’s guidance with hope and confidence in the face of all the sufferings and adversities of our daily life.

Consequently, we must not lose our serenity and peace even in the midst of our untold trials and difficulties in this “valley of tears.”  We may be sure of it: from on high, Mary follows our footsteps with gentle concern, dispels the gloom in moments of darkness and distress and reassures us with her motherly affection. We know that she loves us with a tender and maternal heart and protects us. In all our anxieties and sufferings Mary keeps us close to her heart, consoles us, strengthens us; she offers our prayers and petitions to her Son Jesus and intercedes for us. Supported by this awareness, let us forge ahead in this valley of tears fixing our eyes at such a wonderful mother. We can be sure that Mary, our loving mother will never let us down.