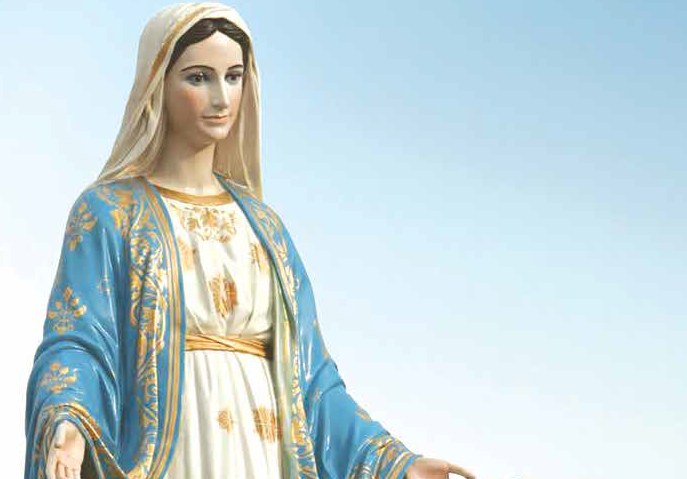 Mary, the mother of Jesus Christ, is one of the most pre-eminent stars in the horizon of Christianity. She is known by many titles like the Blessed Virgin Mary, Queen of Heaven, Mother of God, Our Lady, Queen of the Apostles, etc. The notion that Mary gave birth to Jesus while remaining a virgin is taught explicitly in the birth narratives of Matthew (1:18 ff.) and Luke (1:34 ff.).

Can Mary be called also co-redemptrix? That Mary is co-redemptrix is a doctrine accepted by many Catholics, but it is not yet formalized by the Pope. It has always been a controversial concept and it has never formed part of the dogma of the Catholic Church. This title indicates that Mary participated in some way in the redemptive work of Christ. This doctrine is based on Mary’s free acceptance of her opportunity to give birth to the Saviour, as indicated by her reply, “May it be unto me as you have said” (Lk 1:38). Thus the title co-redemptrix refers to a subordinate but essential participation by the Blessed Virgin Mary in redemption, notably that she gave free consent to become the mother of the Redeemer, which meant sharing his life, suffering and death, which were redemptive for the world.

In the writings of the early church fathers, Mary is mentioned only occasionally and primarily in contrast to Eve. The concept, however, is already present in the writings of Justin the Martyr (d. c.165) and Irenaeus (d. c. 202) when they speak of the “Second Eve”. They contrasted Mary’s obedience with Eve’s disobedience. Just as Adam and Eve killed the life of God dwelling within them by disobedience, so did the New Adam and the New Eve restore that life by obedience to the will of God. The first reference to Mary as co-redemptrix dates back to the 14th century. It is an idea which was the subject of considerable theological debate.

Over the years, however, the term co-redemptrix has come to denote a more active role for Mary than her assent. Because of her humility, piety and role as the mother of Jesus Christ, the Saviour of humanity, she has been accorded great respect in all branches of Christianity and is a favorite subject in art, music and literature. In Roman Catholic and Eastern Orthodox Churches, Mary is the pre-eminent saint and the focus of much popular devotion. Despite the reformers’ rejection of the veneration of Mary and other saints, most early Protestant reformers including Calvin, Heinrich Bullinger, John Wesley and even Martin Luther had strong positive feelings and respect for Mary, the Mother of God. In recent years, Protestant Christians are in the process of rediscovering the importance of Mary in the Christian faith.

It is to be noted that the Roman Catholic view of co-redemptrix does not imply that Mary participates as equal partner in the redemption of the human race, since Christ is the only redeemer. All agree that Mary herself needed redemption and was redeemed by Jesus Christ, her Son. Being redeemed by Christ implies that she cannot be his equal partner in the redemptive work. The term co-redemptrix was not used in the concluding chapter of the dogmatic Constitution of the Second Vatican Council, which is considered to be a comprehensive summary of the Roman Catholic Mariology.

Mary’s role in the redemptive work

Co-Redemptrix refers to Mary’s participation in Jesus’ redemptive work. Mary’s intense sufferings at the foot of the cross (Jn.19:26), united with those of her Son, were “also a contribution to the Redemption of us all”, says the saintly Pope John Paul II (Salvifici Doloris, n. 25). Because of her intimate sharing in the redemption accomplished by the Lord, the mother of the Redeemer is uniquely referred to by him and the Church as the co-redemptrix. It is important to note that the prefix ‘co’ in the title co-redemptrix does not mean ‘equal to’ but rather ‘with’. The Marian title co-redemptrix never places Mary on a par with her Divine Son, Jesus Christ. Rather it refers to Mary’s unique human participation which is completely secondary and subordinate to the redeeming role of Jesus, who alone is true God and true Man.

As St. Pope John Paul II says, Mary’s suffering at the foot of the cross was also very significant. St. Paul says: “Now I rejoice in my sufferings for your sake, and in my flesh I complete what is lacking in Christ’s afflictions for the sake of his body, that is, the Church,” (Col 1:24). If Paul could say that by his sufferings he is completing what is lacking in Christ’s afflictions for the church, it is all the more certain that the Mother of the Redeemer, in her intense suffering, participates in the redemptive mission of Jesus Christ. This is a role we all can partake, but this role is dependent on Christ and subordinate to Christ. Pope John Paul II cautioned against “all false exaggerations”; his teaching and devotion to Mary consisted in exalting Mary as the first among believers and giving primacy to Christ. When asked in an interview in 2000 whether the Church would go along with the desire to solemnly define Mary as co-redemptrix, the then Cardinal Ratzinger (later Pope Benedict XVI) responded that, the formula “co-redemptrix” departs to too great an extent from the language of Scripture and of the Fathers and therefore gives rise to misunderstandings.

The title co-redemptrix is usually considered in connection with two other Marian titles: mediatrix and advocate. The designation mediatrix has long been part of the devotional life of the Church and was further developed during the pontificates of Popes Pius X, Pius XI, and John Paul II. The Second Vatican Council declared: “In suffering with her Son as He died on the cross, Mary cooperated in the work of the Saviour in an altogether singular way by her obedience, faith, hope and burning love, in restoring supernatural life to souls…. Therefore the Blessed Virgin is invoked in the Church under the titles of Advocate, Helper, Benefactress and Mediatrix” (Lumen Gentium 61- 62). However, Catholic theologians differ as to the precise nature of Mary’s participation in the redemptive work of Christ, and, as aforementioned, the Pope has yet to speak ex cathedra on the subject.

Many Catholics call Mary ‘the mediatrix of all graces’. It means that all the graces that Christ obtains for humanity are dispensed by and through Mary. The Second Vatican Council also touched on this subject when it stated that “the Blessed Virgin’s salutary influence on men flows from the superabundance of the merits of Christ, rests on His mediation, depends entirely on it, and draws all its power from it” (Lumen gentium 60). This also has not been formally affirmed by the pope, but it is popular among many Catholics. However the Council says that, “this title is to be so understood that it neither takes away anything from nor adds anything to the dignity and efficacy of Christ the one Mediator” (Lumen Gentium 62). Paul says that“Christ is the one and only mediator between God and man” (1 Tim. 2:5). In his Apostolic letter ‘Tertio Milennio Adveniente’ (1994), St. Pope John Paul II said: “Christ, the Redeemer of the world, is the one Mediator between God and men, and there is no other name under heaven by which we can be saved” (Acts 4:12). However it is a Catholic belief that Mary and all the saints in heaven can pray and intercede for us just as well or infinitely better than our friends on earth. “The recourse we have to Mary in prayer follows upon the office she continuously fills by the side of the throne of God as Mediatrix of Divine grace….” (Pope Leo XIII).